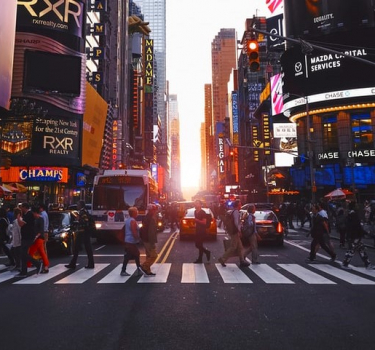 With Dance The World Broadway 2022 approaching and the continuous changes in the nation during this pandemic, we decided to give you some fun and exciting ideas to try in NYC! You may not know what’s currently still available to see and do in the Big Apple but don’t worry, we have you covered. Here is our list of things to check out in NYC in 2022!

The Statue of Liberty is one of the most notable statues in the world and was a gift of friendship from the people of France to the United States. This striking figure was in turn meant to symbolize the American welcome to immigrants and those seeking refuge. The Statue of Liberty was dedicated on October 28, 1886 and was designated as a National Monument in 1924.  There are several ways to see this historic monument including a tour or simply heading over to the One World Observatory to get a stunning look of it for yourself.

The Vessel at Hudson Yards Redevelopment Project in Manhattan is an attraction like no other. The sixteen-story structure is made up of a series of honeycomb staircases and platforms that is extraordinarily brain-twisting.  It was created with 154 interconnecting flights of stairs that have a combination of 2,500 individual steps and 80 landings. Vessel is composed of bronzed steel and concrete with an interlaced structural design that offers an incredible view of New York City.

The Met was originally opened in 1870 albeit in a different building as the current structure was later built in 1879. The collection of art in the museum is among the greatest on Earth and is something you absolutely do not want to miss. It has 2.2 million square feet of space and seventeen curatorial departments with over 2 million works of art within its walls. The collection includes over 5,000 instruments including the world’s oldest piano which dates all the way back to 1720!

As the name suggests, Central Park is a 2.5 mile long park set right in the middle of New York City. It has become a main attraction in Manhattan as you can rent remote control boats, go hiking and visit the zoo or museums from there.  Central Park is also one of the most filmed locations in the world appearing in hundreds of movies dating back to 1908. Some movies include When Harry Met Sally, Elf, Home Alone 2, The Avengers, I Am Legend and more!

Dance The World Broadway 2022 will be here before you know it. There is still a ton of fun to be had in the Big Apple through the pandemic.  Join us in NYC and check out these incredible sights for yourself!

As the seasons begin to change and we begin to enter the fall, we wanted to take a look back to the magic that was summer 2022, starting off with...
Read more

Hear what Dancing with the Stars Celebrities say about our events!

What a memorable summer DTW 2022 has been! From Disney, to Broadway, all the way to Nashville, our dancers truly rocked every stage and our stars had a great time...
Read more

With Sing The World right around the corner we would like to spotlight our celebrity host Jordan Fisher! We will be in Walt Disney World December 10-13 for our All-New...
Read more